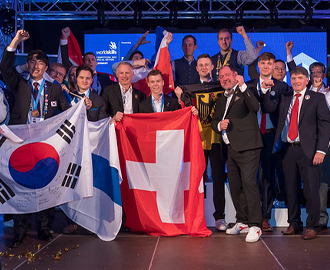 Ontario, Calif. (Nov. 8, 2022) — The International Association of Plumbing and Mechanical Officials (IAPMO) was pleased to have participated in the Plumbing and Heating event at WorldSkills Competition 2022 Special Edition (WSC2022SE), Nov. 2-4 at GROHE Technikum in Lahr, Germany. The competition showcased national champions from 20 WorldSkills member countries.

Plumbing and Heating competitor Florian Bliem of Austria captured the gold. Joint silver medals were awarded to Tom Pean of France and Marton Offner of Hungary, and the bronze medal was won by Tai-Yu Chen of Chinese Taipei.

“What we are seeing today at WorldSkills is the best of the best, showcasing their skills and inspiring other people to do their best quality work,” Gans said. “We are looking at the future of plumbing, and plumbers. These are the young men and women who are going to take plumbing to the next level and help change the world.”

The event also showcased a new Plumbing Champions training activity, sponsored by the World Plumbing Council and delivered by the International Water, Sanitation and Hygiene Foundation (IWSH), charitable arm of The IAPMO Group. Three young students, accompanied by one mentor and one interpreter — all from Ukraine — were sponsored to participate in an educational workshop completing the same test project as was tackled in the WorldSkills competition, guided and supported by technical experts from IAPMO and GROHE.

Mayor of the city of Lahr Markus Ibert paid a special tribute to the Ukrainian group in his closing remarks.

“I would like to thank all participants who made this special event possible, and I wish you all the best for your ongoing life; success, and peace — especially to our guests from Ukraine. To you, to your families and your neighbors, have a good time, in peace, and with benefits, for a good life.”

The biennial WorldSkills international competition returns in September 2024, where it will be hosted in Lyon, France.