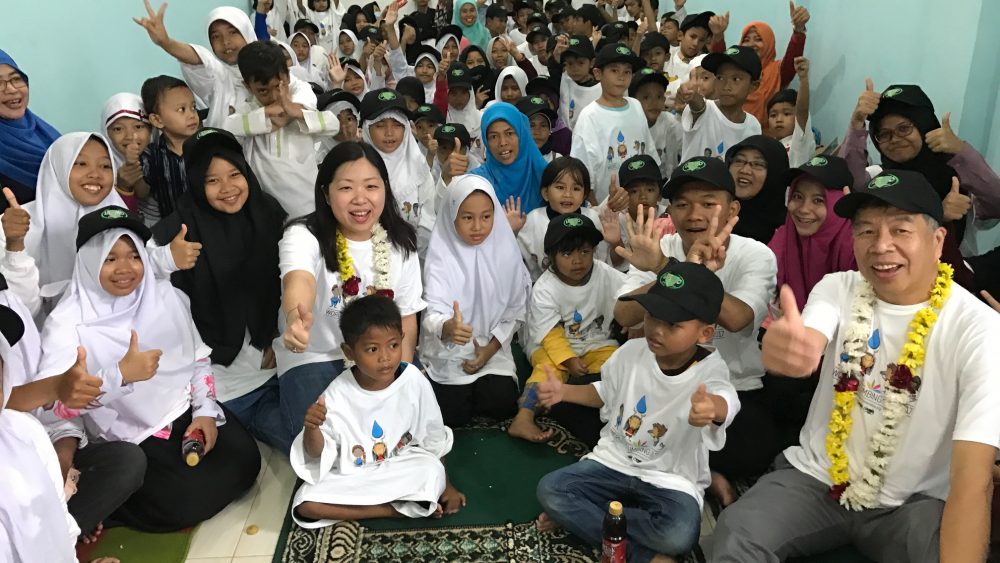 Jakarta Timur, Indonesia (March 20, 2017) – Officials from IAPMO and the PT IAPMO Group Indonesia on March 18 visited more than 200 children at Yayasan Rahmatan Lil-Alamin orphanage, teaching them about the importance of plumbing, sanitation and water conservation in celebration of World Plumbing Day.

Shirley Dewi, Senior Vice President of PT IAPMO Group Indonesia, and Ken Wijaya, Executive Vice President of PT IAPMO Group Indonesia, delivered presentations at the event, which revolved around the World Plumbing Council’s March 11 observance of World Plumbing Day and included a poster contest and coloring contest. The winners of the contest were announced during the event and will be recognized during the fourth annual education conference commemorating World Plumbing Day on March 30 in Balai Kartini, Jakarta.

The purpose of the social event at the orphanage in Jakarta Timur was to provide education about the importance of good plumbing, sanitation and water conservation to young children, as they are the future generation and need to install good plumbing systems and adequate sanitation due to the limited amount of water that may be consumed by humans.

“IAPMO has been working with Yayasan Rahmatan Lil-Alamin for four years now, teaching kids the importance of plumbing and sanitation,” Dewi said. “The children have been very receptive and involved in the process, and have participated in our celebration by sharing their understanding of the importance of plumbing and sanitation through song, play, and poem. In fact, one of the songs they created has become an opening anthem for our World Plumbing Day celebration.”

Erin Hendrian, Chairman of Yayasan Rahmatan Lil-Alamin, said, “We appreciate very much and would like to thank The IAPMO Group for this social event. We wish The IAPMO Group continued success and hope that our foundation can continue to be involved in future IAPMO events.”

Wijaya agreed that it is important to teach children about the importance of good plumbing, sanitation and water conservation.

“As IAPMO continues its work promoting the standardization of plumbing systems throughout Indonesia, it is important that we get children invested in the plumbing process to ensure future generations have access to safe, reliable sanitation systems, and healthy drinking water,” Wijaya said.

Indonesia released a new national standard for plumbing — SNI 8153:2015, Plumbing Systems for Buildings — on March 18, 2015, as part of the nation’s World Plumbing Day celebration. SNI 8153:2015 will be included in the guidelines for water conservation of GREENSHIP rating systems, a Green Building Council Indonesia program.

Sponsor of the Uniform Codes, IAPMO® — The International Association of Plumbing and Mechanical Officials — works in concert with government and industry for safe, sanitary plumbing and mechanical systems. Learn more about IAPMO at www.iapmo.org.