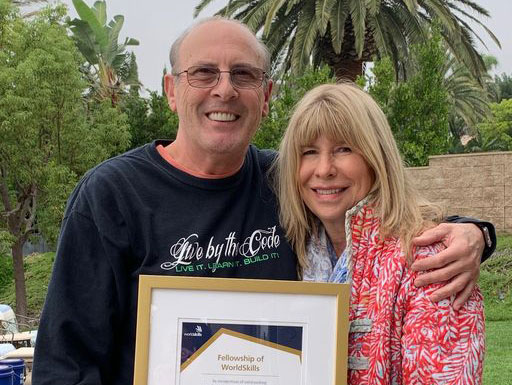 WorldSkills has awarded the honor of a Fellowship to Russ Chaney for his “longstanding, highly distinguished, and valued contribution” to vocational education and training.

Mr Chaney retired this year as CEO of the International Association of Plumbing and Mechanical Officials (IAPMO) after serving the organization for 25 years.

The WorldSkills Fellowship, which has been given to only a handful of individuals to date, was presented at WorldSkills General Assembly 2021, with David Hoey WorldSkills CEO praising Mr Chaney’s “experience, commitment, professionalism, and energy.”

Describing Mr Chaney’s commitment to the plumbing industry as impressive and passionate, he added, “Together we have done some amazing projects around the world and helped make it a better place.”

This included the WorldSkills Foundation, of which WorldSkills Global Partner IAPMO were a founding member and with Mr Chaney taking a key leadership position on Board.

“It was a significant financial contribution but just as importantly it was a head, heart, and hands engagement as well,” Mr Hoey said.

He also singled out a project from WorldSkills Kazan 2019 that saw Plumbing and Heating Competitors and Experts come together to repurpose the Test Project as new washrooms and toilets for an orphanage home serving children and young people with special needs.

The project “typifies IAPMO and the values and leadership that Russ drove,” Mr Hoey said.

He added “Russ, please know that you hold a very special place in the development of WorldSkills and we thank you for that. The award you are about to receive is very special – there are only a handful of recipients because it is earned over a long period for significant contribution.”

Mr Chaney joined IAPMO in 1995 as CEO after starting his career as an apprentice plumber in 1974. He has served several terms as a member of the World Plumbing Council Executive Board, including its chairman from 2011-2013 and is also the current American National Standards Institute (ANSI) Chair.