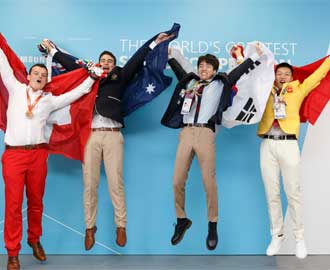 Woo-Eui Jo of Korea took home the gold medal in Plumbing and Heating at the 45th WorldSkills competition, whose results were announced during a closing ceremony for WorldSkills Kazan 2019 at Kazan Arena this evening.

The silver medal was awarded to Yingzheng Yang of China, while Patrick Keating of Australia and Patrick Grepper of Switzerland shared the bronze medal.

All results from the competition may be viewed at https://worldskills2019.com/en/event/results/. A total of 1,354 competitors from 63 countries and regions competed, and medals were awarded in 56 skills.

Next year, the WorldSkills competition will be held in China for the first time. WorldSkills Shanghai 2021 will be held from Sept. 22-27, 2021, at the National Exhibition and Convention Centre, the world’s largest free-standing building and exhibition complex.

In a final-day tradition dating back to WorldSkills St. Gallen 2003, all participants within the WorldSkills Plumbing and Heating competition – Experts, as well as Champions – are recognized for their outstanding achievement and contribution to the international plumbing industry with a personally-engraved medallion from the World Plumbing Council. This tradition continued @worldskillskazan2019, as each and every Expert and Champion from the 3️⃣1️⃣ countries involved this year were presented with a medallion at the end of our Team Project on day four.